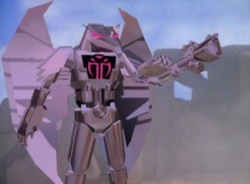 "An arrogant, crafty and intellectual warrior whose total confidence in his flying skills is completely justified. Merciless and cruel by nature, Soaron--who stands just under 7 feet tall--enjoys the sport of war and is fond of playing cat and mouse with enemies.

Soaron has a mainframe designed for speed, agility and firepower. His arsenal includes the Digitizer, Photon Blasters, Reflexor Missiles and Implosion Bombs. Soaron can deploy enough firepower to destroy a small city!" --From the official series materials.

The first Warlord-Class Bio-Dread Dread ever built, Soaron can think for himself and is capable of self-regeneration when damaged or destroyed. Soaron resembles a bird with a human body. He has a beak like mouth and his feet resemble those of a bird, but he has humanlike hands and torso. Occasionally, one spots a tail waving around from Soaron's back.

Initially, Soaron was the "favored son" of the Lord of the Empire. Armed with a Digitizer on his left forearm, Soaron swooped around the Empire, picking up on stray colonies or humans that escaped Dread's marching enemies, digitized them, and took them home to Overmind to be "fed" into its system. He regularly did Dread's dirty work, supervising units and destroying whatever is left of the world that Dread might have missed.

Other times, he has the uncanny habit of running into the Jump-Ship whenever it is airborne, and Dread usually deploys him to hunt down The Soldiers Of The Future or to provide air support when Power conducts ground assaults. Unfortunately, Soaron is somewhat easily duped. For a machine, he is unable to seemingly understand the concept of a "lure" or a "trap." Soaron is often easily distracted by other targets if presented with them, and the usual strategy of The Soldiers Of The Future, when faced with Soaron, is to attempt to outrun him, or allow MAJ Matthew Masterson, call sign "Hawk," to lead him on a wild-goose chase.

Soaron eventually lost his favored-son status when Dread created Blastarr, and it quickly became clear who was the more competent of the two in Dread's eyes. A more sophisticated model, Blastarr is also susceptible to traps, but he is less destructible and more difficult to damage. There is competition between the two Warlord-Class Bio-Dreads, a strange manifestation in the light of the fact that they are supposed to be unfeeling machines, and which resembles sibling rivalry, each striving to compete for Dread's approval and favor.

Yet when it comes to reliability, Dread knows that he can rely on the loyalty of Soaron, compared with Blastarr, who sometimes appears somewhat rebellious. When Volcania is threatened by the debris from Dread's space station[See New Order], it is Soaron who Dread sends to stop it. It is Soaron to whom Dread appeals. It is Soaron who "defends The Home Of The Machine." And it is Soaron who gets as close as possible to defending, to the death, the cause of The Machine. 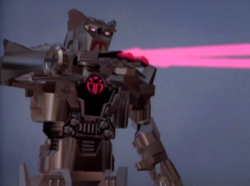 "A gigantic bionic creation with both firepower and surveillance expertise. Hot-tempered and inflexible in his strategic planning, his movements are deliberate and single-minded. His trigger-happy nature is the source of occasional, but usually costly, mistakes.

Blastarr's radar sense provides excellent cover for the protection of Volcania and his weapon systems give him a staggering defense mechanism capable of withstanding a major assault. His arsenal includes the Digitizer, Proton Bazooka, Power Charges, Energy Leech and Electron Blasters." --From the official show materials.

Blastarr was to be Dread's new breed of Warlord-Class Bio-Dread--designed as a ground unit to enable him to reach the areas Soaron could not. His creation was the Charon phase of Project New Order. [See "The Ferryman."]

Had The Soldiers Of The Future not ruined the Charon phase, Blastarr would have had hundreds of brethren--as it was, he was the only one created who was "perfect." [A second Bio-Dread was also created, Lackki; however, he was an imperfect "mutation."]

Blastarr is built like a tank and has the firepower to match one. Laser blasts eminate from his fingertips [Soaron fires from his eyes and forearm emitters] and he also has a shield which unfurls from his right forearm during battle. Blastarr's feet have caterpillar chains on them which allow him to navigate various kinds of terrain without difficulty and with great speed.

Blastarr's relationship with Dread is rather curious. In moments, Dread refers to him as "my son," a term he does not employ with Soaron. Blastarr, however, refers to Dread as "my Lord," as Soaron does. Dread also appears to be more forgiving of Blastarr's mistakes, and more indulgent of Blastarr's thirst for violence and action. However, there is no doubt that when Blastarr enters the scene, he soon becomes Dread's favorite son. And like in any happy family, there is bound to be sibling rivalty as Blastarr and Soaron bat it out to be Dread's favorite.

The impression that more than one "Power Fan" developed was that Warlord-Class Bio-Dreads, like children, have to grow up and mature. Blastarr's behavior certaintly mirrors that of a child--he blasts rocks and shoots indiscriminately - it craves praise and approval, but needs to be treated firmly at times. Blastarr can also come across as being rebellious at times, forcing Dread to chastise him. Blastarr's personality seems to lean towards that of a bully, as witnessed by how he tortures Soaron for information even though they are on the same side. He also does not appear to be as intelligent as Soaron--he is easily baited and employs a very simplistic though destructive strategy of shooting everything in sight. This reinforces the perception that Blastarr is all brawn and no brains.

"BioDread Living Reactor
Xenon has an exoskeleton of pure pulsating energy, making it hard to distinguish its shape, size, features or exact location.

Its nuclear energy is channeled through the exoskeleton in the form of devestating blasts, which are capable of melting down anything they strike, even a Power Suit!
Created without the rages of arrogance or pride which the previous Warlords exhibited, Xenon is a true Bio-Dread monster, dedicated only to the ends of death and destruction." --From the official show materials.

Xenon would have appeared in Season Two of Captain Power And The Soldiers Of The Future.

Community content is available under CC-BY-SA unless otherwise noted.
Advertisement